and ideas together in a respectful manner"

several local newspapers 4 public access computers, 2 chrome books for check out or in library use,

free Wi-Fi and 6 Wi-Fi Hotspots for check out. We also provide services for printing, scanning, and copying.

We also offer a variety of adult and youth programs throughout the year.

Its Beginning —
Lake Benton Library first opened its doors April 26, 1935, at the city hall and was open only two hours a week.

However, the library actually had its beginnings with the Excelsior Federated Women’s Club which began in 1929.

The first books and magazines in the library were donated and collected by the Excelsior Club.

During the early years of the library,

it was funded by donations given at silver teas and from monetary gifts.

In 1958 the library received funds from the city.

Additional Library activities include Adult Book Club on the first Monday of every month, 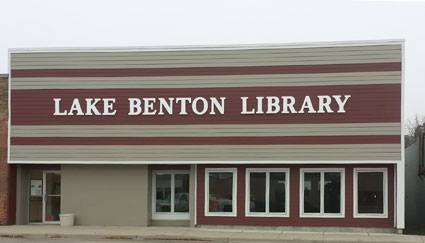